The ENA Member Spotlight is a monthly showcase of select members and their stories.

Would you like to be highlighted, or have someone to suggest for a member spotlight? Contact us today!

Kristine Powell is a lifetime ENA member and a 35-year ED nurse. Not only that, but Kris is also a longtime volunteer with ENA. She has served on a number of committees and advisory councils and held countless roles within her state and chapter. In honor of National Volunteer Week, ENA asked Kris to share her story. 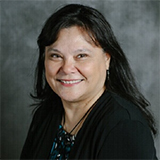 Her journey in emergency nursing.

This year marks Kristine’s 35th year in emergency and trauma nursing. She started working in the emergency department as a graduate nurse in 1987. Over the years, Kris has served as a staff nurse, charge nurse, ED/trauma educator, injury preventionist, trauma program manager and ED director. She is currently the divisional director of emergency services for the North Texas Division of Baylor Scott & White Health.

In 1989, several Texas Tarrant County ENA chapter officers visited the local ED to personally invite nurses to attend a chapter meeting that evening. Kris joined ENA that night and became an active member in the chapter by regularly attending meetings. She soon became a TNCC instructor and faculty and, later, an ENPC instructor and faculty. She helped develop a CEN review course with a group of Tarrant County ENA members and continued to update and teach the course for almost 20 years. When Kris became a chapter officer, she was introduced to the Texas ENA State Council and became active with committees and its board. After taking on increasing roles of responsibility at the state level, Kris applied for a national committee and was accepted as an inaugural member of the ED Operations Committee. Since then, she has served on several other national committees and is currently a member of the Quality & Safety Advisory Council. Kris also contributed as an ENA liaison to other professional organizations, currently doing so as liaison to the Emergency Department Benchmarking Alliance 2022 Summit. In addition, she has delivered poster and podium presentations at ENA’s annual conference and has authored several chapters in the ENA Core Curriculum. Kris was proudly inducted as a Fellow in the Academy of Emergency Nursing in 2015 and is currently on one of the new AEN Trailblazer workgroups.

How volunteering enhanced her experience with ENA

Over the past 30 years, Kris’ ENA volunteer activities have kept her refreshed and invigorated with each new adventure. She has met many professional colleagues and learned much from them. Kris has been mentored by the best in emergency nursing, including Sally Snow, the nurse manager who hired her for her first job. She gained leadership and professional skills which helped to lead and mentor in the ENA world. Kris has received ENA scholarships that allowed her to advance her education and travel to new places, make many friends and laugh – a lot – along the way.

What she enjoys outside emergency nursing?

Outside of work, Kris enjoys spending time with her husband, Joe, two rescue dogs and a herd of cows on a small ranch south of Fort Worth, Texas. She feels lucky to have family close by – her parents, a brother, three sisters, including her twin sister, and her own twins, Stephanie and Eric. Kris also enjoys reading, crafting, crochet, cross-stitch and calligraphy.