Quickly access the education you need to better manage and prevent the devastating consequences of this crisis with ENA's new and improved Opioid Education Bundle. Practice simulation and digital badging now included!

Educate yourself and others on this pressing topic with our new and improved, convenient Opioid Education Bundle. This bundle now includes online practice simulation PLUS ENA's most pertinent resources and tools to help better manage and prevent the devastating consequences of this crisis. Access everything in the bundle, in one simple click at special bundle price.

Practice how to safely discharge a patient receiving an opioid prescription with our new interactive, online practice simulation - only available within the Opioid Bundle package!

The Opioid Crisis: Emergency Care Practitioners at the Front Line webinar provides an overview of the crisis, how it affects emergency department and what steps can be taken to get patients on a path to recovery.

Exclusive to our valued ENA members, receive an Opioid Education Knowledge Badge upon meeting the badge requirements and passing the bundle completion assessment.

How the digital badge works:

This video segment was produced as part of ‘The Opioid Epidemic: Empowering Community Action’ and current affairs-style program designed to raise awareness of effective practices communities are using to stem and reverse the epidemic produced in collaboration by the AMA Alliance (AMAA) and ITN Productions.

The program aims to highlight the commitment of the government agencies, nonprofits, universities, and AMA Alliance community to work towards solutions on the most pressing issues in addressing solutions for patients enhancing comprehensive treatment and support for substance use disorders. 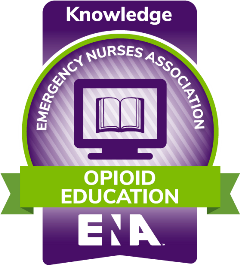 The Emergency Nurses Association is a leading voice in the push to improve emergency health care for patients struggling with opioid-use issues. Learn how by viewing the latest federal and state news below:

Jul 20, 2017, 09:22 AM by User Not Found
The threat from opioids has become so prevalent that the Emergency Nurses Association is dedicating four sessions at their national conference, Emergency Nursing 2017, in September to help healthcare professionals deal with it.

DES PLAINES, Ill. – The opioid epidemic ravaging communities across the United States is posing a new threat to those on the front line who are working to combat it. Increasingly, police officers, paramedics and emergency nurses are treating patients who have overdosed on opioids, and in some cases, those healthcare providers are being exposed to toxic levels of the drugs.

The threat from opioids has become so prevalent that the Emergency Nurses Association is dedicating four sessions at their national conference, Emergency Nursing 2017, in September to help healthcare professionals deal with it.

“We can’t take these drugs off the streets, but what we must do is ensure emergency departments are prepared to deal with the patients who are flooding through the doors in alarming numbers,” said Karen Wiley, MSN, RN, CEN, president of the Emergency Nurses Association. “The sessions at Emergency Nursing 2017 are designed to educate nurses on the latest developments to help battle this growing problem, and teach them how to put protocols in place.”

The Opioid Addiction and Deaths Spiraling Out of Control session will educate nurses on the dangers of emerging drugs sold on the street like carfentanil, a synthetic drug often disguised as heroin. “Carfentanil is traditionally used as an elephant tranquilizer, so the amount needed to kill a human is frighteningly small,” said Cathy Fox, RN, CEN, CPEN, FAEN, who will lead the session. “EMS, police and emergency department personnel can easily come in contact with a fatal dose without even knowing it, so it’s imperative that they are able to recognize patients that are on this particular drug and take extreme measures to reduce their risk of exposure.”

Carfentanil can be sold as powder, in pill form or on blotter paper and is five thousand times more potent than heroin. Healthcare workers who come into contact with an overdose victim of carfentanil can become lethally poisoned themselves, merely by touching the patient without the proper protective gear, or even by breathing in trace amounts of the substance. “Our goal is to educate emergency nurses about what’s out there and the risks they could face any time an overdose patient arrives at their facility for care,” said Fox.

The ALTO I – Alternatives to Opioids – Intro to ALTO and ALTO II – Alternatives to Opioids — ALTO Program Implementation sessions will focus on breaking the grip of opioid addiction by cutting down on the number of prescriptions that are written in the first place. The sessions will be led by Dr. Alexis LaPietra, DO, and Kimberly Russo, BSN, RN, CEN, FN-CSA, of St. Joseph’s Regional Medical Center in Paterson, NJ.

St. Joseph’s was the first in the nation to implement the Alternatives to Opioids program (ALTO), which focuses on treating patients for pain without exposing them to opioids and the dangers of addiction.

The Opioid Crisis and Information System Technology in the Emergency Department session will highlight technology that can be employed in emergency departments to better identify and track patients who frequently seek opioid prescriptions.

“Unfortunately, some patients are very opportunistic in getting providers to write opioid prescriptions to them,” said Eric Ringle, MS, RN, who will lead the session. “The good news is, there is emerging technology that allows us to track prescriptions much more closely, so it’s less likely that patients can go from one place to the next to get these drugs.”

“Sharing that information is invaluable in helping to prevent abuse and, in many cases, can help initiate an intervention that could save a patient’s life,” said Ringle.

The Emergency Nurses Association is accredited as a provider of continuing nursing education by the American Nurses Credentialing Center’s Commission on Accreditation.

The Emergency Nurses Association is approved by the California Board of Registered Nursing, Provider #2322.